The Houston Healthcare Initiative podcast can be heard on SoundCloud, iTunes, iHeartRadio, LibSyn, Spotify, and the Houston Healthcare Initiative web site. In the book and podcast Posner tells a compelling story that links the history of the pharmaceutical industry from the mid-19th century to the twenty first. It is not a flattering narrative. Many of the practices that were incorporated into marketing and selling heroin and cocaine in the early 20th century were and are still used today. And like they did before, the same companies are deliberately downplaying of the risk of modern-day medicines like opioids that have led to addiction and death for so many Americans.

Mr. Posner’s work and the interests of the Houston Healthcare Initiative coincide in several important ways. “The reform of the entire healthcare industry including the pharmaceutical business is our mission,” said Dr. Steven Goldstein who founded the Houston Healthcare Initiative. “We were very flattered he took time to talk with us and the audience about this important topic and we hope that everyone who reads his new book is inspired to act.”

Profits, Then Everything Else

Marketing, sales, advertising and abuse of patent law are all used against the American public to boost sales and stock prices of drug companies. This is part of the historic heritage that links the business’ past to today. “Only by knowing its history,” Mr. Posner writes, “is it possible to fully appreciate how the battle between noble ambitions and greed is a permanent conflict.” Mr. Posner tells many stories about the people behind the industry and the some of the ethically questionable things they did and still do.

The mindset of these and other actors id’ed in the book can be better understood with one of many informative stories Mr. Posner relates. According to Mr. Posner, eight people in a single family ‘made the choices that caused much of the opioid epidemic.’ The family in question is the Sacklers, notably Arthur, who “had some clever ideas of how to disguise product promotions as ‘news’ covered in consumer press.” According to media experts, the ad made to look like news or ‘advertorial’ is a really low rung on either the paid ad or public relations ladder.

Mr. Posner detailed this during his interview on the podcast. “In 1947, defense attorneys for Nazi doctors charged with war crimes for human experimentation at concentration camps cited the malaria experiments in a failed effort for an acquittal. He went on, “when Nazi doctors are citing clinical trials from your industry as grounds for an acquittal in their own legal trials, you have erred.”

To learn more about Gerald Posner visit his web site at https://www.posner.com/.

Dr. Steven Goldstein is a Houston based neurologist. He founded the Houston Healthcare Initiative and is an advocate for common sense solutions to the healthcare crisis that confronts the citizens and residents of the United States of America. 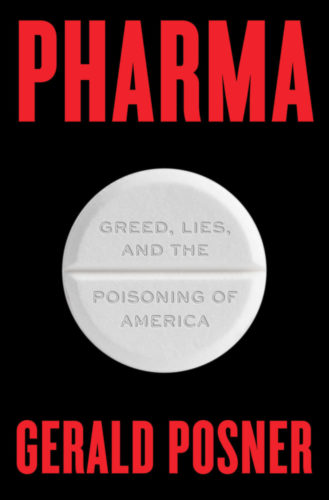 Among many shocking facts included are that many of the practices that were incorporated into marketing and selling heroin and cocaine in the early 20th century are still used today. And like before, those same companies are deliberately downplaying of the risk of modern-day medicines like opioids. Refer to www.houstonhealthcareinitiative.org and www.posner.com. Be sure to read “Pharma: Greed, Lies, and the Poisoning of America.”