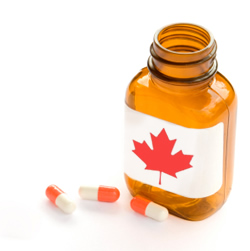 Why Are Prescription Drugs Cheaper in Canada?

Even those with private, employer funded health insurance gasp at the price of some prescription medications. Learning that the same medicine is available north of the border at a substantially reduced price often produces other emotional reactions from surprise to anger. There are plenty of reasons those drugs are priced differently.

Listeners to the Houston Healthcare Initiative podcast will learn why as respected neurologist Dr. Steven Goldstein explains how the combination of foreign government requirements and U.S. government non-regulation combined to give the American public sticker shock at the drug store.

The Houston Healthcare Initiative podcast can be heard on SoundCloud, iHeartRadio, iTunes, Stitcher, and the website at www.houstonhealthcareinitiative.org.

In short, drug prices in Canada are lower because the Canadian government regulates the price. In Canada, a review board decides on pricing and what they believe are reasonable or excessive prices. If they decide a drug is priced too high, they will not allow it on the drug formulary. This board, the Patented Medicine Prices Review Board, is described in Canada as a quasi-judicial agency.

Before a prescription drug can be sold in Canada it is scientifically reviewed to make certain that it can do what it is supposed to do. A committee of experts known as the Human Drug Advisory Panel will make recommendations about other valid drugs on which to make comparison, in addition to recommendations for the categorization of new drugs. The level of therapeutic improvement of an existing patented drug is used to determine a ceiling price, known as the Maximum Average Potential Price, at its introduction.

The U.S. government is prohibited by law from negotiating prices for Medicare and other government programs. “Obviously, the drug company needs to recoup the cost of research, manufacture, advertising and the cost of getting the drug approved by the FDA,” Dr. Goldstein told his listeners. “The people in this country essentially pay for all of this work as countries like Canada do not allow their citizens to share the cost.” New drugs are issued a patent giving the drug company a monopoly on sale of the drug for 20 years. The drug company is free to set whatever price it likes for prescription drugs. Prices are then negotiated between insurance companies and the manufacturers.

The U.S. and Canadian systems each present two very different models for drug pricing, neither of which is reasonable. The Canadian system does not allow enough incentive for new drugs to be created. The American system results in unaffordable prices. “There are several needed reforms,” Dr. Goldstein said. “We are not able to flip a switch and adopt the prices charged in Canada, though that would be nice.”

The reforms Dr. Goldstein recommends are:

“If these reforms were enacted, prices for drugs would be determined more by supply and demand,” Dr. Goldstein said. “This would ensure an adequate supply at the lowest price. For high priced drugs of marginal benefit, demand would be low and would tend to cause the price to drop. For new orphan drugs, the government could provide subsidies.”

Houston Healthcare Initiative (HHI) was founded by Dr. Steven Goldstein. Like many Americans, Dr. Goldstein is concerned about the state of the U.S healthcare system as well as the sorry state of the public’s health. The Houston Healthcare Initiative web site is an aggregator of news, healthcare pricing information, and resources for those who want to help drive reform for the healthcare industry. HHI’s emphasis for reform is on free market innovation and personal responsibility.